Did you love the audio drama series Cold Reboot? Want to know what’s next for our protagonist, Erica Crawford? 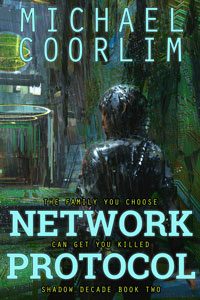 The family you choose can get you killed.

Spring has come to Chicago, and Erica has adapted well enough to the future to settle into a peaceful routine. She fills out applications, goes on job interviews, avoids people, and tries to adjust by watching the decade of television that she’s missed. The less she leaves her apartment, the less confusing 2026 seems, and Kate — the ruthlessly competent inner voice that’s kept her safe — has been silent since the mastermind behind the attempts on her life was arrested.

Still, social isolation isn’t all its chalked up to be. Erica’s lack of a support network becomes increasingly problematic as the gang that runs her Block gets swept up into a citywide gang-war, and narrowed eyes increasingly see her as an outsider in their midst. Can she open up enough to find acceptance?

Network Protocol, the sequel to Cold Reboot, is now available for purchase at Amazon, Barnes & Noble, Google Play, iBooks, and Kobo. For the last week of April ebook copies of both it and Cold Reboot will be on sale for 99 cents, and the paperback is $15.